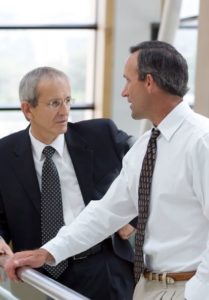 [1]Someone on my team had blown it. Not ethically or morally. He had simply taken too long to complete some significant tasks, which put one of our clients in an awkward position in a mediation case.

Our staff member’s attempts to apologize to the client seemed to fall on deaf ears. Since the “buck stops here,” I realized I needed to step in and seek to repair the damage. So I picked up my phone and dialed our client’s number to apologize for our failure to serve him well.

Before the phone rang twice, however, I hung up.

Even though the damage seemed to be minor in my eyes, it dawned on me that our client could easily see this as a major problem. Therefore, it called for a face-to-face conversation.

So I booked a flight the next day and called the client to ask if I could take him to lunch to apologize personally for what had happened. His guarded response confirmed that this was no small matter to him.

When I walked into the restaurant the following day, I saw our client, an attorney himself, flanked by two of his staff attorneys. He apparently suspected that I might try to shift the blame or minimize the damage. So he brought “the troops” to back his case.

My gut tightened up a bit, so I prayed that God would give me grace not to become defensive or competitive (two of my most natural reactions in a situation like this).

We exchanged pleasantries as we scanned the menu and placed our orders. Then after a moment of awkward silence, I moved into a “Seven-A Confession [2].”

I acknowledged our failure to administer the case in a timely manner. Although I was sorely tempted to point out how he had caused several major delays himself, and also how obstructive the other party had been, God helped me to avoid making any excuses whatsoever.

Instead, I admitted our mistakes in detail and acknowledged how they had probably impacted the client, both emotionally and substantively. Finally, I offered a solution to get us back on track … plus a commitment to waive our entire fee if he was not completely satisfied with the outcome of the process.

He was clearly stunned. As he glanced at his colleagues, they showed the same surprise.

Once he collected his thoughts, he told me he had expected me to make excuses and downplay the seriousness of the delays. So they had actually spent an hour at their office that morning preparing a counterattack. My unqualified confession caught them totally off guard.

The mood at the table changed dramatically. The tension evaporated, bodies relaxed, smiles become more natural, and we all switched off “attorney mode.”

In response to my no-excuses apology, the client actually started making excuses for me (a perfect example of “the Golden Result [3]”). He admitted that they had failed to give timely responses on two critical exchanges, and he pointed out that the other party was consistently late in his responses.

As tempting as it was to minimize our failure by agreeing with him, I said, “I appreciate that. But it’s actually beside the point. As a Christian ministry we are committed to serve you with excellence regardless of others’ actions. We failed to do that, and I’m here to do whatever it takes to make things right with you.”

After a short, congenial tug-of-war as to who was most responsible for the delay, we both laughed out of pure relief. We were not going to be adversaries. We didn’t need to use our adversarial skills against each other. We could relax and work together to find a solution that moved us in the direction we all wanted to go.

It’s often the fastest way to turn a conflict into an opportunity to build a closer relationship.