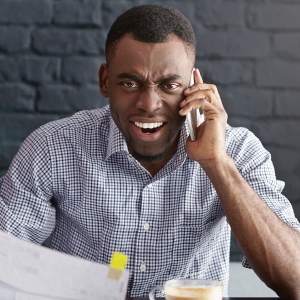 XYZ Translators (all names changed) was about to lose a ten-year investment in learning the language of a remote tribe in Africa. John and Janice had lived with the tribe for a decade, building relationships, mastering their vocabulary and creating an alphabet they could use to write a New Testament Bible in their language.

Then John had an intense argument with XYZ’s Africa Director.

Years of technical disagreements and personal irritations had stretched their relationship like a rubber band. All of that tension was shockingly released when a minor financial disagreement exploded in a heated exchange over the phone. When the Director’s anger boiled over with a threat to remove John from his assignment, John struck back with an even greater threat.

The country where John served has a law forbidding any kind of discrimination against a citizen by a foreign organization. Knowing that an organization that broke this law could be barred from doing business in the country, John threatened to have a tribal friend file a discrimination complaint against XYZ. If that complaint was accepted, XYZ would be forced out of the country before it could complete the translation. Ten years of painstaking work would be shelved … and an entire tribe would be deprived of the Bible for years.

A Call for Help

When the Executive Director of XYZ called to ask for help, he wanted us to send a conciliator to Africa as soon as possible. I told him it could cost over $10,000, but he was unfazed. “We have far more than that already invested in this project,” he responded. “How soon can you get someone on a plane?”

Hating to see them incur such a large expense, I suggested an alternative.

“Let’s try a less expensive approach first. I’ll FedEx a copy of The Peacemaker book and a related Personal Application Workbook to both men. You ask each of them to take two days off their regular work and find a place where they can read portions of the book and answer workbook questions I assign. That might be enough to get them back on the right track.”

Although the Executive Director was skeptical, he agreed to give this process a chance. “But if we don’t see progress in a week,” he said, “I want a conciliator on a plane to Africa.”

The breakthrough actually took place in less than a week.

The books arrived in four days and both men dutifully started on their assignments. I later learned that on the first day of their respective retreats, both of them came under conviction as they encountered the “1st G” of peacemaking: Glorify God [1].

As they read several Scriptures calling them to bring praise and honor to God in the midst of conflict by relying on and drawing attention to his wisdom and grace, especially as it is revealed in the gospel, their consuming and blinding desire to glorify, justify and vindicate themselves lost its grip on their hearts.

Then they encountered the “2nd G” of peacemaking: Get the log out of your own eye [1].

Their reading assignment required them to meditate on Bible passages dealing with self-examination, repentance and confession. As the Holy Spirit worked in their hearts, Hebrews 4:12 was fulfilled: “For the word of God is alive and active. Sharper than any double-edged sword, it penetrates even to dividing soul and spirit, joints and marrow; it judges the thoughts and attitudes of the heart.”

They were both especially challenged by James 4:1-2, “What causes fights and quarrels among you? Don’t they come from your desires that battle within you? You desire but do not have, so you kill. You covet but you cannot get what you want, so you quarrel and fight.”

This passage helped them to see how they had elevated personal desires and expectations to sinful demands, which had led them to judge and punish each other and blinded them to how much harm their conflict could cause to other people (see The Progression of an Idol [2]).

As their own sins became apparent, each of the men found a new level of hope and joy in the gospel, realizing that Jesus had paid for every one of those sins through his death and resurrection. This realization softened their hearts and attitudes, and enabled them to write amazingly humble and transparent messages of confession and forgiveness to each other.

When I received copies of those confessions, I cried for joy, thanking God for the redeeming power of his Word and his Spirit … and also for the fact that this vital translation project was being pursued with a new level of inspiration and joy by two men reconciled through the gospel. 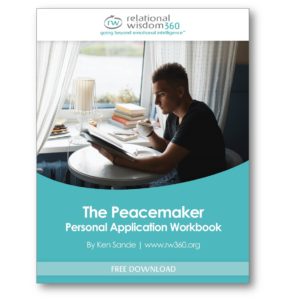 If you are ever called to help others resolve a serious conflict (or are in such a conflict yourself), I encourage you to use the tools and approach described above.

Give each of the parties a copy of The Peacemaker (available in our Bookstore [3]) and The Peacemaker Personal Application Workbook (available as one of our Free Downloads [4]), and ask them to work through the chapters and questions that seem most relevant to their situation.

There is nothing magic about these two resources. But as the story above illustrates, there is something incredibly powerful about the Scriptures and the gospel message that these resources will help people to study and apply.