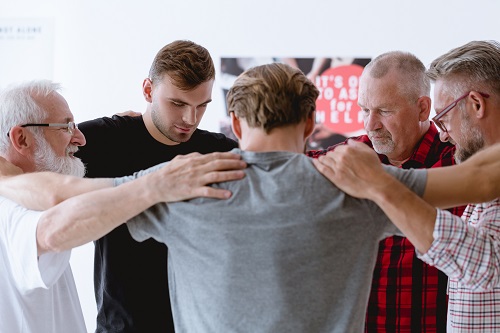 At last he had his chance. Clutching his prepared statement in his hand, Mark sat down in the front pew, ready to get even with the elders (all names have been changed).

Six months earlier they had refused to support his promotion to senior pastor. They had stood silently by when Mark was slandered in a congregational meeting. Worst of all, some of them had repeatedly talked about him behind his back, voicing their doubts about his ability to fill the shoes of their retiring pastor.

After months of escalating tension, the elders finally called in a team of trained conciliators. During two three-day visits, the conciliators taught peacemaking to the congregation, facilitated personal discussions, and encouraged Mark and the elders to set an example for the church by acknowledging their own contributions to the problem.

Mark gave some outward indications of repentance, but inwardly he could not let go of his belief that the elders’ repeated sins against him far outweighed his few mistakes.

Now, with the second set of weekend meetings drawing to a close, the elders were going to make a corporate confession of their wrongs to the congregation. Their prepared statement did not go as far as Mark and his wife thought it should, however, so he and Donna secretly planned to publicly elaborate on the elders’ sins against them.

As the service began, one of the conciliators preached a brief message on Matthew 7:3-5 about Jesus’s command to get the logs out of our own eyes before pointing at the specks in others’ eyes. He then explained that the goal of the meeting was to give the leaders and members of the church the opportunity to obey this teaching.

The head elder then came forward and took the microphone. Reading from a prepared statement, he acknowledged several ways that the elders had wronged Pastor Mark. Then he looked straight at Mark and Donna and said, “We have sinned against you both and caused you great pain. We are so very sorry.” It was evident from the tears in his eyes and the emotion in his voice that he was speaking from his heart.

Then another elder stepped up, confessed his own sins, and asked for forgiveness from the associate pastor and the congregation. A third elder did the same. The conciliators had expected only two or three them to speak, but before long seven of the nine elders had come forward to add their personal confessions to the statement that had already been read.

Mark was battling with his thoughts. He was still angry and hurt, but the elders’ spontaneous words of confession had put a crack in the wall he had built around his heart. Donna sensed that he needed a few moments to collect his thoughts, so she stood up and stepped to the microphone.

Turning to the elders, Donna said, “I came here tonight planning to tell everyone how much you have hurt Mark and me. But in the last few minutes, God has shown me how wrong I have been. I finally understand what the Lord has been trying to tell me in 1 John 3:15. By holding onto my hatred, I have been murdering each of you in my heart for months. I am far more guilty than you are. I do forgive you, and I ask you to forgive me.”

As she walked back to her seat, Donna’s face showed the freedom she felt. Her bitterness had been washed away.

Mark’s feet felt like they were made of lead as he rose and walked toward the microphone. The war in his heart was building to a climax. He could hold onto his anger and try to get even with the elders for the pain they had caused him, or he could find freedom and peace by forgiving them and confessing his own wrongs. With growing emotion, he realized that he could not do both.

“Help me, God,” he silently prayed as he reached the microphone. Suddenly his fingers opened and his notes fell to the floor. Turning to face the elders, he spoke words that he had never expected to say that night.

“Donna was wrong. I am actually the guiltiest person of all. As associate pastor I should have set an example of humility and submission. I should have trusted God to work through the elders and the congregation to select the next senior pastor of this church. Instead, I let my desire for this position control me, so I took matters into my own hands.”

“I exalted myself and became defensive when people raised honest concerns about my abilities. I became angry that people were talking about me behind my back, but then I did exactly the same thing. Instead of going to talk personally with those who had spoken against me, I avoided them and wallowed in resentment. Even when some people asked for my forgiveness, I refused to give it.”

“I have failed miserably as your pastor. And worst of all, I dragged Donna into my bitterness. I ask God for his forgiveness, and I hope that he will give you grace to forgive me, too.”

The elders rose as one man to embrace Mark. Reaching out, they drew Donna into the circle.

Then another voice was heard behind them. Two additional microphones had been placed before the congregation. An elderly man stood before one of them, wanting to take his share of the blame. Before he was done speaking, a woman had moved to the other microphone, compelled by the same Spirit to find peace through confession. Then another and another confessed sin, slander, divisiveness and hardness of heart. Everyone pointed to himself or herself. Each person became his own accuser.

After forty-five minutes of confession, quietness fell over the congregation. One of the conciliators closed the meeting in prayer. When he finished, he sensed that God was not done working. So he suggested that people turn around and greet one other with the exhilarating truth, “The Lord has forgiven all your sins!”

The people shared this good news with each other and hugged and talked for so long that the conciliators finally made a quiet exit. They knew that these people were in good hands—God’s hands. 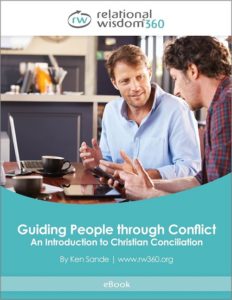 God brought about this marvelous reconciliation through a team of trained conciliators. If you know of a church that is struggling with conflict and needs this kind of assistance, please click here [1] to learn about our conciliation services. Our Certified RW Conciliators™ have been cross-trained in relational wisdom, biblical peacemaking and Christian conciliation and have helped dozens of churches experience the repentance and forgiveness described in this true story.

To learn how to develop your own in-house team of peacemaking trainers, coaches and conciliators, see Peace Sower Teams [2] and Guiding People Through Conflict [3].