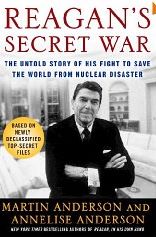 [1]Study Ronald Reagan and Abraham Lincoln and you’ll learn a great deal about how to relate to your spouse, children, co-workers and the people in your church or ministry.

Both men displayed their exceptional relational skills on the world stage. Lincoln led our country through the Civil War, the bloodiest period in our nation’s history. Reagan led us out of the Cold War, which threatened to annihilate human civilization.

This ability is sometimes referred to as “emotional intelligence [2]” (EI) in the secular world and “relational wisdom [3]” (RW) in a biblical context. It continues to play a vital role in politics, as illustrated by the growing number of articles [4] discussing the emotional intelligence of modern world leaders.

Reagan’s Secret War [5], written by Martin and Annelise Anderson (Crown, 2009), unveils the story of Reagan’s fight to save the world from nuclear disaster. I had a hard time putting this book down as I learned how Reagan brought the U.S. and the Soviet Union back from the brink of unleashing their 60,000 + nuclear weapons—many of which were a hundred times more powerful than the bomb dropped on Hiroshima.

I’ve long admired Reagan’s people skills, but this book took my admiration to a whole new level. The Andersons quote scores of Reagan’s personal notes and diary entries, revealing how accurately he discerned the emotions and interests of other people and adjusted his strategies and words to build trust and forge seemingly impossible agreements.

For example, just before flying to his first summit meeting with Mikhail Gorbachev in November of 1985, Reagan took a yellow pad of paper and wrote a memo to himself [6] summarizing what he knew about the General Secretary, as well as the strategy he himself would use in the upcoming negotiations.

This memo is a vivid illustration of the negotiation skills Reagan had developed as he sat across the bargaining table years earlier, representing his actors’ union against the executives who ran Hollywood. He later described his basic negotiating strategy as follows:

Reread this simple strategy. Think about how you could apply it when discussing an emotional or divisive issue with your spouse, child, employees or deacon board.

For even more insights on how to prepare to discuss volatile issues, take a few minutes to read Reagan’s memo [6]. It is as brilliant as it is brief (just 1,200 words).

Then if you’re a husband, ask yourself, “Have I ever studied my wife this carefully? Do I know the woman I live with as well as Reagan knew a man living on the other side of the world? If not, isn’t now a good time to follow his example and learn to really know my wife and show how much I value her?”

If you’re a mother, ask yourself, “How can I understand my children this well? Discern their strengths and weaknesses, their fears and dreams, and come alongside them to chart a course in life that thrills them as much as it does me?”

Are you a pastor? Then pray, “Lord, please give me the same passion, insight and wisdom that you gave to Ronald Reagan. My flock is as precious to me as this nation was to him. Our spiritual wars have eternal consequences. Help me to discern the gifts, struggles, hopes and concerns of our people, and lead them by word and example as we seek to live up to our full potential in your kingdom.”

Do you employ or work with other people? Then lead and collaborate like Reagan did. Study those around you. Listen carefully to their words. Read their emotions. Discern their interests. Put yourself in their shoes. Demonstrate the same kind of empathy, concern, and vision that Reagan used to forge a partnership that changed the world.

Do you want even more inspiration? Then keep reading just a bit more …

Toward the end of Reagan’s Secret War, the authors describe President Reagan’s 1988 trip to Moscow to sign the INF (intermediate-range nuclear force) treaty. “Mikhail” and “Ron” (as they had come to call each other in private) had several momentous meetings with each other. But the highlight of the trip for Reagan was his address to over a thousand students at Moscow State University on May 31.

If you take a few minutes to read this magnificent speech [7], you will be inspired by Reagan’s stunning ability to discern and engage the thoughts, emotions, and dreams of people who held an entirely different world view. Among other things, he had carefully studied the history of the Russian people so he could use the words of their own scientists, scholars, poets and authors—as well as words of the Bible—as he cast a vision for “reconciliation, friendship, and peace.”

He clearly captured their hearts with his insightful and engaging words. As one observer noted, “The prolonged standing ovation he received was probably the most enthusiastic he had witnessed since the demonstration that followed his nomination at the Republican convention.”

Take time to learn from this incredibly relational leader. As you read his address [7], ask God to bring to mind relationships in your life that would benefit from a similar exercise of other-awareness and other-engagement [8].

Study the people around you. Take time to discern what moves them, scares them, excites them, unites them. Collect your insights by keeping a journal [9], as Reagan did. Follow his example of writing a memo to yourself to plan important conversations.

In short, become the man or woman of understanding commended by Scripture for looking into the deep waters of others’ lives and drawing out the purposes of their hearts (Prov. 20:5). Then let them know that you value them and are as committed to looking out for their interests as you are your own (Phil. 2:3-4).

This investment in others will not only deepen your existing relationships but may also turn some current opponents—whether at the office, on the church council, or in your own home—into genuine friends.

I’ll postpone a similar discussion of Lincoln’s relational skills to a later post, but let me simply encourage you to read Doris Kearns Goodwin’s best seller, Team of Rivals. [10] You will find equally inspirational examples of relational skills that could transform your world … just as Lincoln and Reagan transformed theirs.