How Well Do You Love Your Enemies? 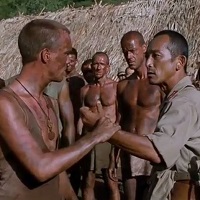 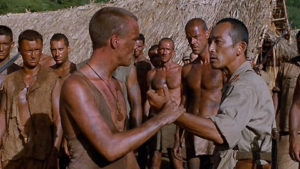 Do you have an enemy today? Someone who has has done you great harm or is out to get you right now?

Perhaps it’s not been quite that bad. Perhaps someone has simply spoken critically to you or about you, or has otherwise disappointed or failed you in a hurtful way.

How are you treating that person? Are you returning wrong for wrong (if only in your heart and imagination), or are you loving that person as Jesus commands us to do?

If that sounds impossible to you, take a moment to watch the short video clip provided below, which shows an astonishing act of love to a deadly enemy.

It’s taken from a movie called To End All Wars. Based on a book by the same title, this movie chronicles the suffering and spiritual transformation of a British soldier named Ernest Gordon.

Captured by the Japanese just months after the attack on Pearl Harbor, Gordon was put to work on the infamous “Death Railway,” which ran from Thailand to Burma (and was made famous by the book and movie, The Bridge over the River Kwai). Over 16,000 Allied prisoners who worked on the railway died from starvation, illness or being beaten to death by their captors.

In the scene you will watch in a moment, some wounded Japanese soldiers from a neighboring outpost come to the POW camp seeking aid. This action violates the Japanese Bushido Code, which calls for wounded soldiers to suffer silently or commit suicide rather than become a burden to their fellow soldiers.

As you watch this clip, study each of the characters carefully and make a list of all the emotions they seem to be feeling. For example, imagine how you would have felt if you were one of the Allied POWâ€™s. If you saw enemies who had brutally tortured and killed your comrades now suffering from their own injuries, would you have felt pity, cold indifference, spiteful pleasure … or compassion?

More importantly, seek to discern what it is that causes Gordon to put aside his natural hatred for his enemies and go to their aid. (If video screen does not appear below, click here.)

What was it that enabled Gordon to love his enemies instead of delighting in their downfall? God-awareness (the capacity to interpret all of life in the light of Godâ€™s character, promises, and power) and God-engagement (the capacity to faithfully trust, imitate and obey God). These are the two most important elements of relational wisdom.

More specifically, Gordon stepped forward because God opened his eyes to see the Japanese not as enemies, but as “wounded, dying human beings,” made in God’s image and therefore precious to him in spite of their sins. God also gave Gordon and his comrades grace to imitate Jesus and to obey his teaching on how to treat an enemy (Luke 6:27-28). As Gordon wrote in his book,

Eighteen months ago we would have joined readily in the destruction of our captors had they fallen into our hands. Now we were dressing the enemyâ€™s wounds. We had experienced a moment of grace, there in those blood-stained cars. God had broken through the barriers of our prejudice and had given us the will to obey his command, “Thou shalt love.”

One of my favorite parts of this scene is how Godâ€™s grace flows over to the young Japanese enlisted man. He is torn between his loyalty to the Bushido Code and the appealing warmth of Christian love that he sees flowing through the Allied POWs. Love proves to be the more powerful force, and he is won over by the Allied prisonersâ€™ example of living out Roman 12:19-21:

Beloved, never avenge yourselves, but leave it to the wrath of God, for it is written, “Vengeance is mine, I will repay, says the Lord.” To the contrary, “if your enemy is hungry, feed him; if he is thirsty, give him something to drink; for by so doing you will heap burning coals on his head.” Do not be overcome by evil, but overcome evil with good.

Here are a few ways you can use this clip to improve your relational wisdom and become more God-aware, self-aware, and other-aware (the SOG plan).

This movie accurately portrays much of the brutality that Allied POWs experienced on the Death Railway. Therefore, although it presents a powerful story of God’s sustaining and transforming grace, it is not suitable for young children.