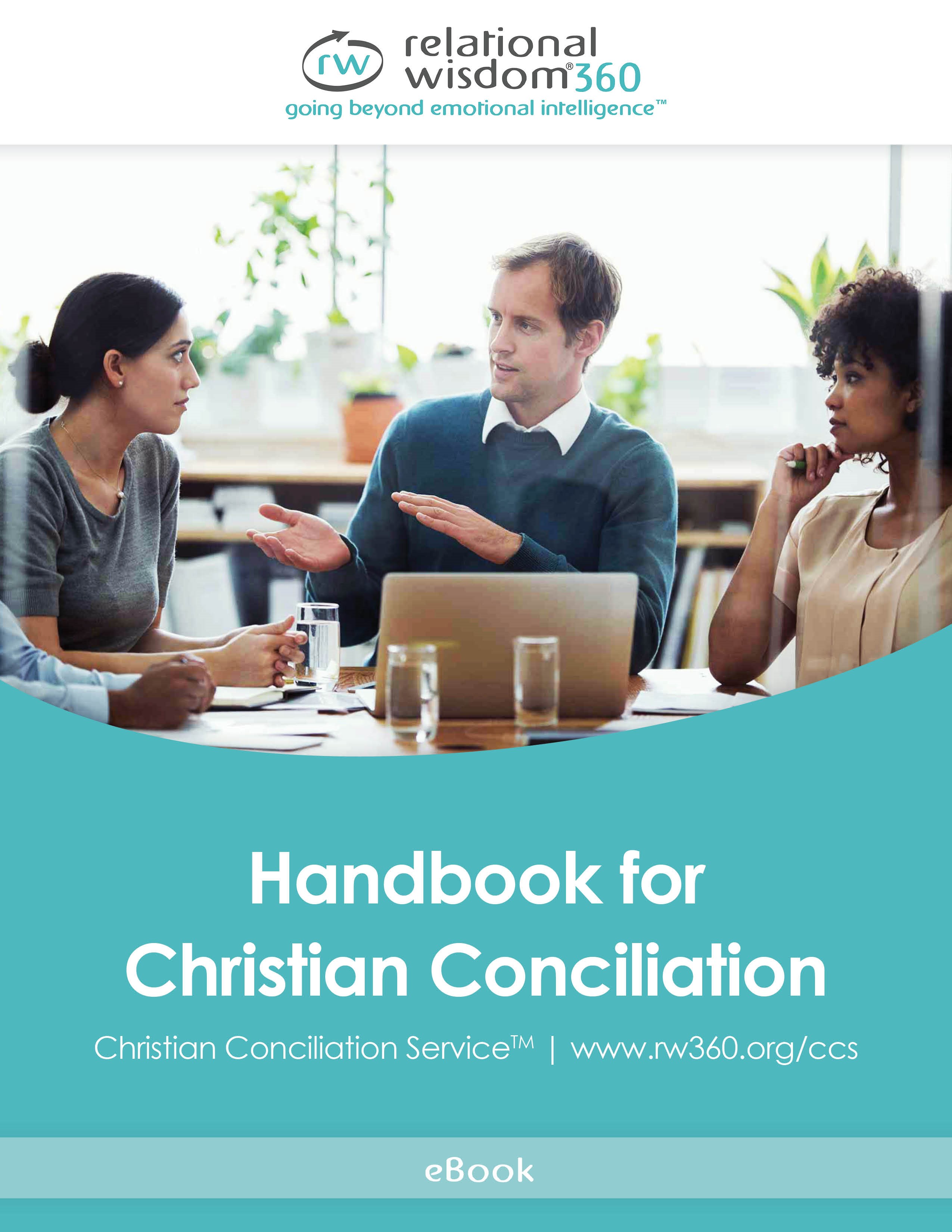 These Rules of Procedure are provided by the Christian Conciliation Service®, a division of Relational Wisdom 360, to guide Christians through a biblically-grounded process for resolving conflict, including lawsuits. If you are unfamiliar with Christian conciliation, we suggest that you read Three Levels of Peacemaking and Introduction to Christian Conciliation – Frequently Asked Questions before you read these Rules. These documents provide an overview of the conciliation process and will enable you to understand these Rules more readily.

These Rules are used by many conciliation ministries, including our primary ministry partner, Crossroads Resolution Group, LLC.

Although many conflicts can be successfully resolved with the assistance of lay conciliators, some disputes are so complex that they require the involvement of well-trained professionals, such as those found on this page of Recommended Conciliation Providers. Furthermore, the Christian Conciliation Service has no control over persons or organizations that use these conciliation procedures outside of its direct administration, and cannot be responsible for the services they provide. For these reasons, when parties select their own conciliators, they should carefully consider the training and experience of the individuals who may serve them.

The purpose of Christian conciliation is to glorify God by helping people to resolve disputes in a conciliatory rather than an adversarial manner. In addition to facilitating the resolution of substantive issues, Christian conciliation seeks to reconcile those who have been alienated by conflict and to help them learn how to change their attitudes and behavior to avoid similar conflicts in the future. These Rules shall be interpreted and applied in a manner consistent with this purpose.

2. Use of Rules and Name of Administrator

These Rules may be used by the Christian Conciliation Service, a division of Relational Wisdom 360, a local Christian conciliation ministry, a church, or any other organization or person who wishes to help parties resolve conflicts pursuant to these Rules. Any such organization or person to whom parties submit a dispute shall be referred to as “the Administrator” throughout these Rules.

3. Definitions and Rules of Construction

Conciliators shall take into consideration any state, federal, or local laws that the parties bring to their attention, but the Holy Scriptures (the Bible) shall be the supreme authority governing every aspect of the conciliation process.

If a dispute or claim submitted to conciliation involves an alleged injury or damage that may be covered by a party’s insurance, the insurer shall be invited to participate in the conciliation process in order to facilitate a prompt and equitable resolution. A participating insurer shall have the same privileges under these Rules as a party with regard to selecting an Administrator and appointing conciliators.

12. Time and Place of Conciliation Meetings

If there is more than one conciliator, the decision of any matter shall be decided by majority vote of the conciliators.

Unless agreed otherwise, the Administrator and the conciliators may discuss a case with the church leaders of parties who profess to be Christians. If a party who professes to be a Christian is unwilling to cooperate with the conciliation process or refuses to abide by an agreement reached during mediation, an advisory opinion, or an arbitration decision, the Administrator or the other parties may report the matter to the leaders of that person’s church and request that they actively participate in resolving the dispute. If a church chooses to become actively involved, it may, at its discretion, review what has transpired during conciliation, obtain such additional information as it deems to be helpful, and take whatever steps it deems necessary to facilitate reconciliation and promote a biblical resolution of the dispute (see Matt. 18:15-20). The Administrator may disclose to the church any information that may have a bearing on its investigation or deliberations.

18. Waiver of Right to Object

19. Interpretation and Application of Rules

The parties agree that the Christian Conciliation Service, the Administrator, and the conciliators shall be immune from any liability for any acts or omissions that occur during the conciliation process.

21. Individual Meetings and Caucuses during Mediation

A mediation meeting will normally include: (1) an introduction and opening prayer; (2) statements by each party clarifying the issues involved; (3) the presentation of each party’s claims, defenses, and witnesses, as well as an opportunity for the other party to respond; (4) questioning by the mediators; (5) a discussion, sometimes in private at first, of each party’s responsibility for the dispute; (6) counsel involving the application of relevant biblical principles; (7) a discussion of appropriate solutions to the dispute; (8) agreement on a solution; and (9) closing comments and prayer. If the parties are unable to reach a voluntary agreement, the conciliators may meet in private for discussion, Bible study, and prayer, and then issue an advisory (non-binding) opinion as to what each party should do to resolve the dispute and facilitate reconciliation.

The mediators shall prepare a written record of any agreement reached by the parties during mediation. That agreement shall be legally binding if, and only if, the parties or their attorneys reduce it to a contract or stipulation that is signed by all parties.

24. Transition from Mediation to Arbitration

25. Description of Issues and Remedies

At the outset of arbitration, the parties shall describe the issues and desired remedies that they wish the arbitrators to consider. The arbitrators shall consider only those issues that are consistent with the parties’ original arbitration or mediation/arbitration agreement, or which are contemplated by an earlier contract between the parties that contains a conciliation clause.

At the outset of arbitration, the parties shall sign forms approving the appointment of the arbitrators. If the parties refuse or are unable to agree on arbitrators, arbitrators shall be appointed pursuant to Rule 10.

Before proceeding with arbitration, each arbitrator may take an oath or vow of office. The arbitrators have discretion to require parties or witnesses to testify under oath or vow, provided that making an oath or vow does not violate the person’s sincerely held religious beliefs. Oaths or vows may be administered by the arbitrators.

30. Discovery and Distribution of Documents

Reasonable discovery (including oral depositions, written interrogatories, and production of documents) may be allowed to identify issues, relevant evidence, and names of witnesses. If the parties cannot agree on the scope of discovery or allocation of costs, the issue shall be submitted to the arbitrators for a decision, which shall be final and binding. The Administrator or the arbitrators may require the parties, at their own expense, to deliver to the Administrator and to the other parties copies of the documents they plan to introduce and a list of the witnesses they plan to call.

All documents shall be delivered in person or by email, facsimile transmission (fax), United States mail or private carrier to the last known address of the parties as given to the Administrator. Notice and other documents shall be considered to have been received on the day they are personally received or transmitted by email, fax, or on the day after they were postmarked, whichever is earlier.

Any party wishing a stenographic record of an arbitration meeting shall make arrangements directly with a stenographer and shall notify the other parties of such arrangements in advance of the meeting. The requesting party or parties shall pay the cost of such record and shall provide the Administrator with a copy, and make copies of the record available to all other parties for the cost of reproduction. A stenographic record is subject to the limitations of Rule 16, and may be used only for appealing an arbitration decision. Video and audio recordings of meetings may be made only with the written consent of all parties and the Administrator.

37. Arbitration in the Absence of a Party

Unless the law provides to the contrary, arbitration may proceed in the absence of any party who, after due notice, fails to be present or fails to obtain an adjournment. A decision shall not be made solely because of the default of a party. The arbitrators shall require the party who is present to submit such evidence as the arbitrators may require for the making of a decision. The arbitrators may, but need not, allow the absent party an opportunity to appear at a subsequent hearing attended by all parties.

The arbitrators may request or consider briefs or position papers that set forth the parties’ understandings of the legal, factual, or scriptural issues.

The arbitrators may reopen a case for good cause at any time before a final decision is rendered.